Last weekend saw some of the business’ greatest Starlight Superstars take part in sporting challenges such as The Windsor Half Marathon and the mile long open water swim, Swim Serpentine.

Sam Saunders took the plunge on Saturday by pulling on his wetsuit and taking part in Swim Serpentine, a mile long open water swim in the Serpentine Lake, Hyde Park. 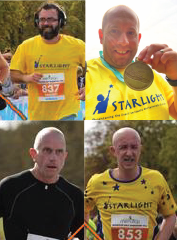 Sam completed the event in an impressive 55 minutes, however due to a fight for space and a slight drift away from the marked buoys, in fact swam 1,956 metres, over 300 more than necessary. Sam’s efforts have so far raised a very impressive £513.48.

Our very own Damian, Danny and Phil took part in The Windsor Half on Sunday. Danny, despite not being able to get out of bed and having a temperature of 102˚ on Friday, still took part and finished in a very respectable 2 hours and 10 minutes having raised a huge £591.25 for Starlight Children’s Foundation so far.

Damian completed the 13 miles in 2 hours and 6 minutes, whilst Phil ‘the machine’ powered home in just 1 hour and 45 minutes. Damian however, not being one to do things by halves was treating this as a mere warm up having signed himself up for a full marathon in March.

This weekend, the Trenton Titans will be taking on the Spartan Race Sprint Event in Windsor. Good luck to those taking part!

A massive well done and thank you to those that have done their bit so far to help us in our £10,000 Giving Back initiative for Starlight Children’s Foundation.

Keep track of the teams here;